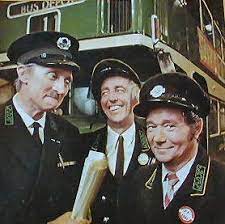 Welcome back to the podcast which celebrates growing up as a child in 1970’s Britain and the central part that television played in our and our families’ lives. There were lots of things going on in the 70’s which were, frankly, rather depressing. In a world dominated by three day weeks, power cuts and strikes, what we needed was a bit of comic relief which was often provided by sitcoms.

Take the sitcom test – how many can you name in a minute and compare to Oliver’s total. We look at the ratings for the 70’s which are dominated by sitcoms and we consider how On the Buses, Man About the House and Bless This House lifted us in dark times and whether they reflected British society at the time. We also consider the idiot savant, or just plain idiot, Frank Spencer in Some Mothers Do ‘Ave ‘Em.