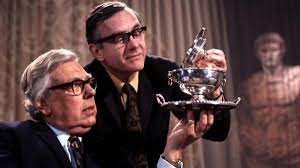 Welcome back to the podcast celebrating growing up as a child in 1970’s Britain and the central part that television played in our lives then.

In this episode, our host Oliver wonders whether our society is more materialistic than in the 1970’s and uses television schedules to compare and contrast. From Homes Under the Hammer, Cash in the Attic and Flog It! it appears that the schedules are full of programmes about turning a fast profit, even the supposedly superior Antiques Roadshow depends on disclosing the value of a piece for its payoff. It wasn’t like that in Going for a Song with the great Arthur Negus and how many people had new kitchens and bathrooms in the 70’s?

We also look at hobbies and collecting things. We remember the excitement of collecting petrol station glasses, Model World which wasn’t set on the catwalks of Paris and Milan but encouraged us all to make models and Why Don’t You? which encouraged children to write in letters with tedious alternatives to watching TV.